By investing in Ivanhoe, amongst other companies, SKAGEN is positioned to take advantage of the shift towards renewable energy and the electrification of transport.

By Fredrik Bjelland Portfolio Manager 28 May 2019

By investing in Ivanhoe, amongst other companies, SKAGEN is positioned to take advantage of the shift towards renewable energy and the electrification of transport.

In mid-May, I travelled to South Africa and the Democratic Republic of Congo (DRC) to visit three projects run by Ivanhoe Mines (Ivanhoe), a portfolio company in both SKAGEN Kon-Tiki and SKAGEN Focus. By investing in Ivanhoe, amongst other companies, SKAGEN has positioned the funds to take advantage of the ongoing shift towards renewable energy and the electrification of transport.

Although Ivanhoe is a relatively unknown company, it owns one of the world’s largest copper deposits in DRC. SKAGEN Kon-Tiki and SKAGEN Focus invested in Ivanhoe in 2018, at the same time as the Chinese CITIC Group bought into the company as a strategic investment at a significant premium. Given China’s ongoing environmental troubles and its focus on renewable energy and electrification of transport, we believe that the country has a growing need to ensure long-term access to copper, which is an important ingredient in both modern batteries and renewable energy networks.

Although Ivanhoe is listed in Canada, all the company’s projects are based in South Africa and DRC. Ivanhoe is currently developing three mines with a focus on platinum (Platreef, South Africa), zinc (Kipushi, DRC) and copper (Kamoa-Kakula, DRC) respectively. All the projects have very low operating and capital costs compared to competitors’ mines thanks to their very high metal grade, i.e. the percentage of metal per kilo of rock.

During our trip, we could confirm that the development of all the projects are on track and in accordance with previously announced plans. With start-up planned over the next 2-5 years, we therefore think that the stock market will eventually discover the underlying value.

Ivanhoe’s crown jewel is the Kamoa-Kakula project in southern DRC (Figure 1). According to the independent mining consultant Wood Mackenzie, Kamoa-Kakula is the world’s largest copper discovery yet to be developed. The technical reports which have been issued to date indicate that the project could produce 5.5% copper (ten times the concentration of “regular” mines) for at least 25 years after phase 1 begins, which we believe could be as early as 2021.

We then expect the project to be expanded further (Figure 2) and that annual production could reach 740 000 tonnes of copper per year. This would make Kamoa-Kakula the world’s second largest producing copper mine with annual earnings of more than USD 4 billion based on current prices (Figure 3). 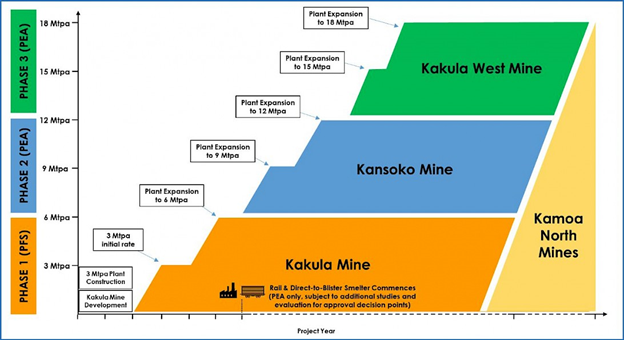 However, we think this could rise even further, simply because there is currently insufficient copper to meet the needs of the green shift. Both the demand and production of copper have grown around three percent a year historically speaking.

As one of the most versatile industrial metals, copper has always been considered an important indicator of economic development, long before the green shift was even considered. With growing urbanisation, especially in emerging markets, and a greater focus on air quality, there are now new, powerful drivers pushing up the demand for copper.

Unfortunately, this expected demand growth is not being met by accelerating supply. Quite the reverse. Due to falling profitability and political resistance to mining development, supply growth has not kept pace with demand.

According to an analysis by Bernstein, the supply increase between 2007 and 2017 was only one third of what had previously been assumed. In addition, given that it can take decades from making a large copper discovery to putting it into production, it is clear that the supply side will struggle to keep up with the increased demand growth (Figure 4). 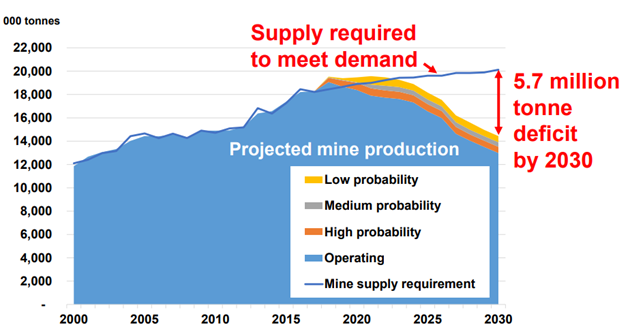 Based on our analyses, neither the present value nor the future potential value is reflected in the Ivanhoe share price. The current market capitalisation of just over USD 3 billion is equivalent to USD 700  per tonne for the company’s proven copper reserves, a discount of more than 30 percent relative to other copper companies.

However, this estimate does not take into consideration Ivanhoe’s higher copper concentration (and therefore lower costs) or the company’s recent discoveries which are not included in the officially announced discoveries. If you include these discoveries, we estimate that the company trades at a discount of 80-90 percent relative to peers. Even taking the political and project-based risk into account, we see a substantial further upside in the share price. 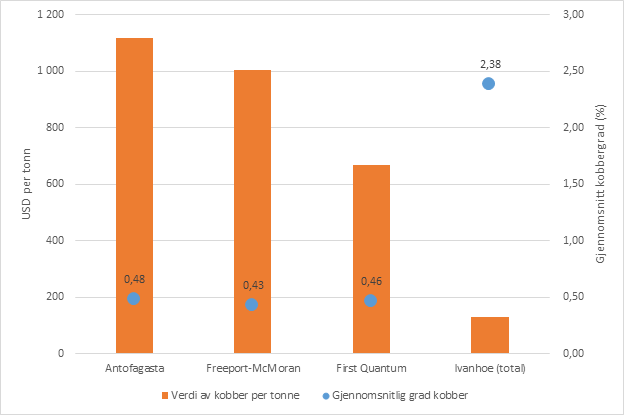 Our visit also confirmed Ivanhoe’s focus on sustainable development. Due to the high metal grades, all the projects are developed as underground mines. In addition to reducing the visible impact on nature, this technique also reduces the amount of waste generated and makes it easier to rehabilitate the area when production is complete. There will also be a high degree of automation in the mines, with a large part of the work carried out remotely.

There is still some way to go, of course, but it is clear that for a project with a decades-long lifetime, both Ivanhoe and the authorities are dependent on good cooperation which has a lasting positive effect on society.